A Taste of Texas & the Two Step 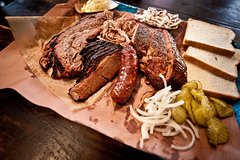 A Taste of Texas & the Two-Step will bring out the cowboy and cowgirl in you! Travelers will enjoy the authentic cuisine of the region, explore wineries and take in the many dance halls and historic sites of Texas. Combine this trip with "A Southern Story" and continue on to New Orleans.
2018 Departure Dates:
April 6
May 4
September 7
October 12

Day 1: We’ll be introduced to our 8-day exploration of Texas culture, food, and dance halls at a nearby Saloon in the Fort Worth Stock-yards National Historic District.
Day 2: Take an orientation tour of Dallas. Visit the Sixth-Floor Museum at Dealey Plaza, located within the former Texas School Book Depository building, which chronicles the assassination of President John F. Kennedy. Travel the route of the Presidential Motorcade and follow the timeline of Lee Harvey Oswald as that fatal day in November 1963. In the afternoon, visit the Stockyards in time to watch the late afternoon cattle drive. Attend the Stockyards Championship Rodeo at the Cowtown Coliseum.
Day 3: Depart Fort Worth for Beaumont Ranch. This western ranch reflects Texas in the 1880s when cowboys were driving their herds along the Chisolm Trail. Take a horseback trail ride, learn how to rope cattle or shoot sporting clays. Continue to Austin, known these days as the Live Music Capital of the World and a mecca for foodies.
Day 4: Begin the day with an orientation tour of downtown Austin to see such sites as the University of Texas, and 360 Bridge. Head to ACL Live at the Moody Theater, the permanent home of the PBS program. Stop for lunch at one of Austin’s famous Food Truck parks. Visit SoCo, a vibrant neighborhood boasts the story of Austin’s yesteryear. Visit the Continental Club. This retro Austin vestige opened in 1957 and is a mecca for roots, rockabilly, country and swing music.
Day 5: A drive through the Texas hill country brings us to Fredericksburg, a charming town that proudly embraces its extensive German heritage. We’ll follow along the Fredericksburg Wine Road and make stops to taste some of the region’s delicious merlots or fruity zinfandels.
Day 6:  In the 18th century, Spanish priests established five Catholic missions along the San Antonio River. The five missions represent the largest concentration of Spanish colonial missions in North America and have been named a World Heritage Site by UNESCO. This afternoon we drive out to Gruene National Historic District. The centerpiece of this sleepy, former ghost town is Gruene Hall, the oldest dance hall in Texas.
Day 7: Upon arrival in Houston, visit Space Center Houston,where we’ll get a behind-the-scenes look at space exploration. Northeast of Downtown sits the Heights neighborhood – popular with the hipsters and young couples that are drawn to the area's architecture, shops and funky restaurants. Enjoy an included final night dinner surrounded by century-old bungalows and unique architectural accents.
Day 8: Those ending their tour in Houston will be transferred to the George Bush Intercontinental Airport. Those passengers who will be joining “A Southern Story” tour will stay on the coach and depart for New Orleans.

A Taste of Texas & the Two-Step will bring out the cowboy and cowgirl in you! Travelers will enjoy the authentic cuisine of the region, explore wineries and take in the many dance halls and historic sites of Texas. Combine this trip with "A Southern Story" and continue on to New Orleans.
2018 Departure Dates:
April 6
May 4
September 7
October 12